So we pick up en route to Ella. I must confess, we completely cheated and hired a driver to take us up the steep winding roads towards the hills. When we arrived we made our way to the Mount View Guest House which, as you can see from the cover photo above, had one spectacular view. It only took a 4am wake up call and some rather super breakfast from Buddhika to get me ready to take a sunrise shot. We planned on setting off a little earlier to Ella Rock (the hill on the right) but were delayed (who knew 4am starts would be so hard), so I decided to try and capture what I had planned from our balcony. Luckily the sun peeked through the clouds and made everything look stunning. It really was an amazing way to eat breakfast on your balcony and we won’t forget it in a hurry.

Anyway, I’m rushing ahead, so back to our first day. We decided to walk Little Adam’s Peak as soon as we arrived to ease us in (on the left of the top shot), as it was an easy 1.5 hour walk. Well it still made me sweat like a beef joint roasting on a Sunday but was a beautiful walk. First we wandered through tea fields as far as the eye could see and when two women who happened to be fairly close picking tea leaves popped up, I snapped away. Now it may seem as though the two tea pickers were happily minding their own business, doing their job when a crazy Yorkshireman came along and pushed a camera in their faces. However, I promise you that I had fully negotiated a well earned ‘tip’ in advance.

As we arrived at the top of the peak, we looked back to see the road we’d just taken cutting through the hills and with the clouds rolling in over the tops, it looked fantastic. The next day we got up early and headed for Ella Rock, with our pocket size hand-drawn map from Buddhika. What followed was a sweaty 4 hour trek. And when I say trek, I mean a BLOODY GREAT BIG TREK! Our adventure started just as we’d planned… just me & Mrs R walking along the railway lines chatting to farmers and school kids (again, slight exaggeration here, two words repeated more loudly than the rest), with just the train tracks for company. In the early morning sun the whole valley looked stunning and I managed to snap these pics of what was going on.

We carried on through more tea fields and after some questionable directions from a local “farmer” we ploughed on towards the top. Or so we believed! As we started to celebrate reaching the finish line, we realised it was a false summit and had an almost vertical 500 meters still to go. At this point we were fairly chuffed that we had got this far on our own as everyone else seemed to have hired locals to guide the way.

Now what I really want to say is the classic, “It was all worth it when we reached the top”, but, well, it wasn’t really! By the time we got there, thick clouds had rolled in and despite us hanging around for a good hour and a half, they never parted and I didn’t get that much anticipated, amazing shot. Instead we drank two cups of Ginger coffee with the dude below and stumbled back down the mountain. In all truth it was still worth it though – the trek alone was ace and wandering along the train tracks in the sun was very cool. 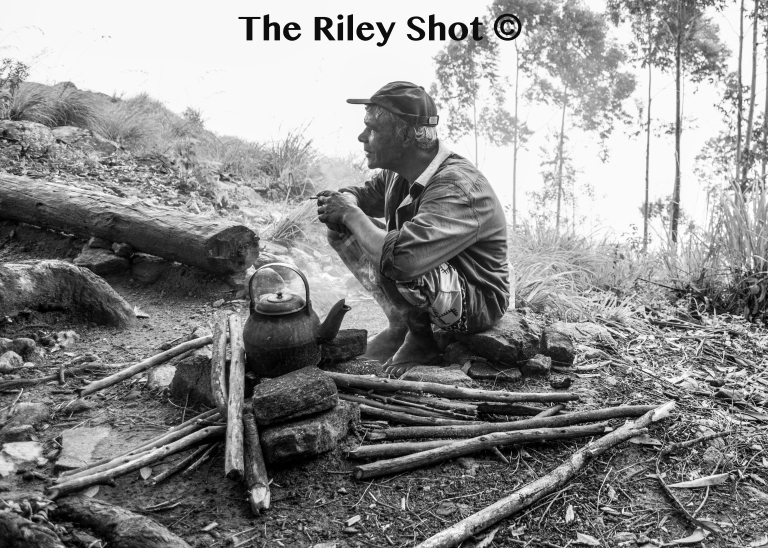 The next day, after some rather super food and great company at Matey Hut in Ella, we headed for one more walk along the railway line. We intended to go to the 9 arch bridge. However, my bad, I took Mrs R the wrong way down the track. Honestly it was a 50/50 chance and I got it wrong but couldn’t bring myself to admit failure until we were 2 hours out of town in the middle of nowhere. Ah well, my excuse is I’m a man! 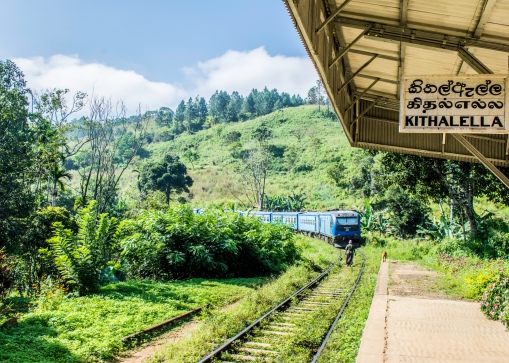 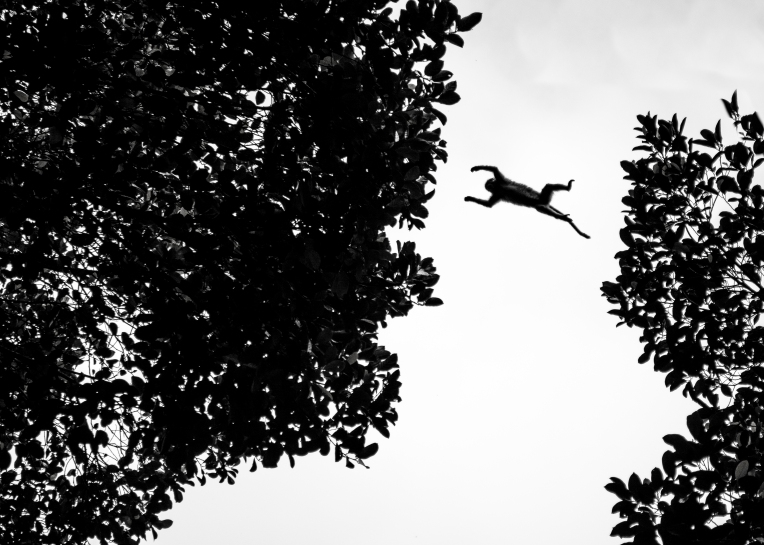 Next stop was a trip to Udawalawe National Park and a steady 3 hour drive. We arrived in a typically busy Asian town – one main street, loads of cars, people and stores. We booked into The Nature House and realised straight away why it got so many great reviews. The owner – Thalik – welcomed us with a big smile, telling us to relax and take it easy as he took us to our room and offered us something to drink. So because it was already going on 3pm we did just that. I got a beer and my Macbook out while we just chilled on the veranda, looking out over his beautiful gardens. Later on, Thalik came to our room and said that dinner would be at 7pm (Ok, no worries we thought, didn’t ask for any but we won’t say no) and he checked whether we’d like to sample his wife’s rice and curry. We obviously had no objections and this turned out to be the best meal we had on the entire trip. We ate outside in his open air restaurant – just 4 tables in a beautiful setting. We decided at this point to book our safari for the following morning – our very own private jeep with Thalik’s Brother in Law as our driver and guide.

Anyway, a quick couple of iPhone snaps in the B&B (sorry not great quality but wanted to show the ace hotel) and onto the morning safari…

The next morning we were up at 5am ready to load into the jeep…wait a minute, I’ve missed a crucial incident that shaped my entire philosophy on spiders. Now, I don’t have any photos but I suggest you google an image at the end of this paragraph. Ok so picture this, its 3.30am and I am tossing and turning a little with a few mosquito bites on my arm that are itching like crazy. The mosquito net drapes over our big double bed whilst the roof fan keeps a nice cool breeze flowing through the room.

Boom…..I wake up suddenly with a wee pain on my hand. I’m laid with my hands behind my head as usual. I look at my hand and see a large bite, dammnnn, another mosquito bite! It’s sore so I roll over to Mrs R and we sit up, then out of the corner of my eye something moves from INSIDE the net and goes under the bed. Ok, quick fight or flight test here…….  and we lost, fright it is. We are out of the net across the room before you can say wimp! Mrs R tells me to go look and as I go over to the bed, an enormous Huntsman spider (found this out later from the owner) runs, quicker than Usain bolt and with more legs, up the wall. Ok, so quick size check, imagine putting your two index fingers together, well this was its body size, plus 8 legs! Hell, it was scary. Anyway 15minutes of wrestling it into the waste paper bin, a swollen hand and some steroid cream later and I was fine. Mrs R on the other hand has a whole new definition of what a “huge” spider really is.

Now enough about spiders and onto the bigger stuff. We knew our jeep safari was going to be memorable when we found out that our guide knew bird calls. I’ll start off with some pics from the safari and then I will tell you why it was the best day of my life (excluding my wedding of course). 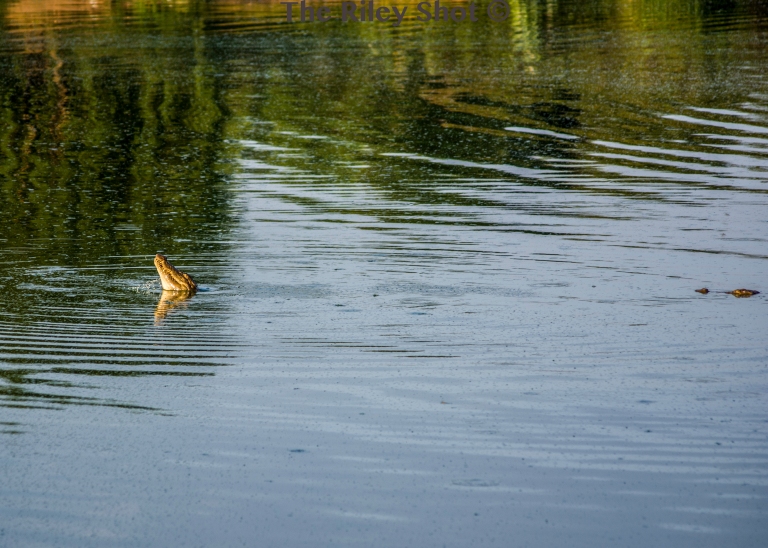 Ok, so above was our morning in the National Park when we stopped at the watering hole for about 30 minutes. At first all we could see were the Water Buffalo, chilled out minding their own business, when after about 10 minutes Mrs R spotted something in the water. Boom, a huge Croc burst out of the water and snapped up a fish in it’s jaws. Then, literally seconds later a huge Bull Elephant came strolling down to the opening for a wee drink. We couldn’t believe it, just as he got comfy and started to take a sip, the Croc poked its head out of the water and the Buffalo started to walk into frame. I snapped away like a huge amateur but what a moment. I am aware that I am a huge geek, but thanks to Sir David Attenborough and (I’m saying this whilst cringing to myself) Michaela Strachan, I dreamt about taking photos like these as a teenager. 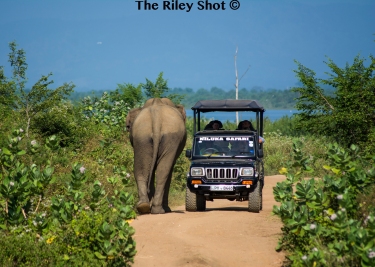 In the afternoon we decided to ask our guide if he’d take us off the beaten track and he told us he would take us to his favourite areas and the quieter parts of the park. We thought that after seeing so many elephants and birds etc that in the afternoon we might as well visit the remote areas on the look out for a Leopard. The guide warned us that in 10 years he had spotted the Leopard just 7 times, so I didn’t hold my breath but we wanted to give ourselves the best chance in Udawalawe Park.  It was worth it,  we went nearly 3 hours without spotting a single jeep, at times feeling very isolated and vulnerable – being out in the wilderness exceeded all of my expectations. 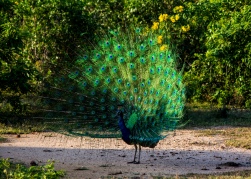 So in the end we didn’t spot a Leopard but as we pulled out of the jungle and made our way to the exit, we spotted 2 Jungle Cats running in the open. We stopped the jeep and spent 15 minutes watching these beautiful cats hiding in the grass, and at the same time spotted a Jackall wandering down the dusty path.

What an amazing day. If you ever decide to visit Sri Lanka this park is a must. Quieter than Yala and from our experience, once in a lifetime.

So after all of the excitement and awesome home cooked food we shot off to Tangalle, to chill out on a beach for a few nights before returning home. We planned this place because it was quiet and well, as close to paradise as we could find. It didn’t disappoint – amazing fresh sea food at Cactus Lounge, empty windswept beaches and of course some ice cold Lion Beer! 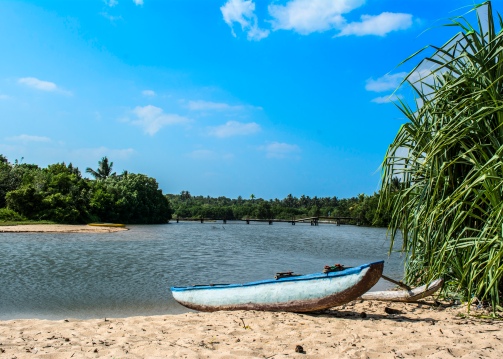 After a few days of lazing on the beach we did visit a few local temples, hence the monkeys above. This was a great place to unwind at the end of an unbelievably amazing trip including one final ‘incident’. We had a cool balcony next to our cabana to chill out on before dinner. Ok, so whilst on the balcony my man duties were needed (demanded by Mrs R). These normally include such jobs as checking chairs and in general any spot that her majesty may wish to frequent on a tropical beach. Our seats outside the room had some lovely comfy cushions and as normal I checked underneath one night.  All I saw was Bruce our pet gecko who lived on our balcony, job done, Mrs R is safe to venture into the jungle we called our balcony…… Out came Mrs R and casually doubled checked the seat, “what the hell is that?” she said. I quickly put down my beer and looked over “ermm, that would be a small scorpion that I didn’t spot before”. You can imagine the rest. Luckily a member of staff was walking past, saw the situation and saved the day. Hmmmm, all’s well that ends well I suppose….

…and on that bombshell, thanks for reading and I’ll be back after Madrid next month just before wedding season kicks off! P.s. Here’s my favourite shot of the trip, boom!

This site uses Akismet to reduce spam. Learn how your comment data is processed.